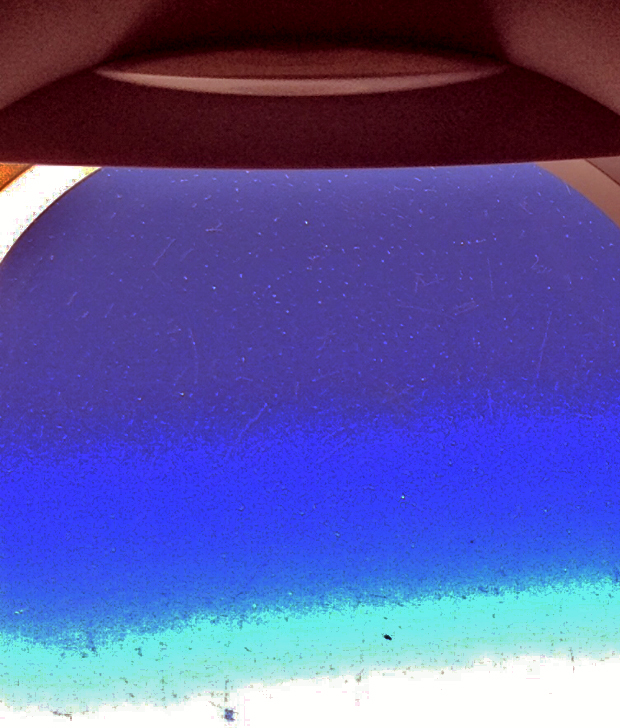 “So, what where you thinking while approaching?”

“I don’t know. I was just grateful to see something out there again. Colours have always intrigued me. It’s the darkness, the thing that I’ve never liked. And there it’s mostly dark, only darkness. Neither night nor day. Not dark, but black. Blackest black. When the panic was surprising me, possessing my arms and my legs, my head was oblivious and I was falling in a vacuum although remaining motionless. And I needed to think that out of that window there was actually only a huge black garbage bag”

“Yes, I used to think that I was safely packed in a plastic bag inside a room and that nothing could happen. The black was the plastic. I was in a small space. Perhaps even under the ground. Yes, indeed! Under the ground, covered by muck and mud! Even better. From there you can always speed up and come back to the surface. And see light and colours again”

“Curious this thing of dreaming a narrow space outside an already cramped space. I can’t quite understand this relief”

“Yes, I get that. Well, it’s true that in there it was very tight. But in that narrow space, with all that dark space around, I felt… I don’t know how to say how I felt. I need the right words”

“A crumb? A crumb compared to what? To a room? To a city? To the earth? No, I wasn’t thinking about any size. The dimensions are so big that it’s impossible to compare them. You feel you’re nothing. This. I felt a particle squirted out of its system. Escaped from the laws of its system. Wrong. I was in the wrong place and I didn’t deserve to live there. Indeed, I didn’t have a life. For this reason I needed to feel anchored to the ground. I needed to be anchored so much that the darkness under the ground would be better than nothing!”

“You were alone. Maybe if someone else was there with you, you would feel more alive”

“Probably. If no one is there with you, there’s no ‘there’. There was no ‘there with me’. Where was I? Well, I had no idea! I did not exist! I existed in half. We exist when we are where nature wants us. Among the other men, with plants, animals, water. The more I was distant from the earth, the more my existence was becoming liquid and rarefied. Gaseous. Intangible. No one really knew where I was, or if I was still somewhere out there. No one could see me. And I could not see anyone. I did not exist. Are you scared by the darkness?”

“When I was a child, yes. Now I don’t think so much about it. Maybe because in the end when I’m in the dark I’m safe inside my house. As a child, every night I was scared of the shadow created on the wall by the coat rack. It felt like there was always a person standing at the foot of my bed, watching me while sleeping. It was creepy”

“I’ve thought about this some times, actually. For us the space is empty and filled by the things that are in it. For us, the air is a kind of vacuum that contains things. Let alone how empty it can be where there is not even the atmosphere”

“Yes, exactly. We say that in the universe there are Earth, Jupiter, Saturn, the Sun, the Moon, all the other stars and the forces that govern them. And then in the middle there is a vacuum. An emptiness that no one cares about. Nothing. But I’ve always felt that this nothing was somhow full”

“You’ve already been asked about the details of the mission. Your answers make me feel a lot of adrenaline. But I feel that I don’t quite understand. Even if I see the pictures, the videos, even if I read the articles, and I hear your other interviews. I fail to see what you might have felt when you got immersed in that atmosphere and when, later, you saw”

“What did I feel? Nothing”

“Nothing? How’s that possible?”

“Nothing because there is no way to say it, and so there is not even a way to think about it”

“Do you mean that there are no words to describe it?”

“So weren’t you even scared?”

“Of course I was scared. But I didn’t know exactly about what. It was a primordial fear, an anguish. And ‘primordial’ is not even the right word, because it still refers to something belonging to the earth. I still belonged to the earth but not being on the earth. I was wrong, I was in the wrong place. I was a particle escaped from its system and immerged in another one, where I wasn’t welcomed because I hadn’t the categories to understand it, I hadn’t thoughts suitable to understand it. I never thought I’d find what I found. It was impossible to predict”

“What was the very first thing you saw on Jupiter?”

“My colleagues and I had established that the Great Red Spot would be the easier place to enter. When I came out below that red halo, I saw an indistinct mechanism in motion. I didn’t know the different parts, I didn’t know how to recognize them. I sensed that something was working on the contrary than what we usually see on earth. Everything was slightly detached from the surface of the planet, but nothing could rise up beyond a certain level. There was no gravity. An opposing force, a strong atmospheric pressure pushed everything down and kept everything stuck. Then I started to recognize the parts, and I realized that they were alive. Everything was alive”

“Did you try to communicate?”

“No, I couldn’t. I was in the wrong place. Everything started to go wrong, as I have already told everyone. I don’t know if it was the will of someone, something. But I saw that something had changed, since I arrived. The environment felt that something was wrong and tried to eradicate or expel that thing. I let them expel me. And it’s a miracle that I’m here again. I didn’t go there to put a flag up, to feel powerful. All the contrary. Those who would do so are only foolish men, soulless”

“So didn’t you do anything?”

“Before leaving I had promised that I would have said something true and honest. I’m not a poet, not a philosopher. I was afraid of not knowing how to use words that could be nice enough, appropriate enough. But then when I got there I realized that simply there weren’t any appropriate words to be used. It didn’t matter being a poet or not. So I said the truest thing that came to my mind. I said something like “I’m a little man who doesn’t understand anything and doesn’t deserve to be here””

“Well, you might also be a little man, but you deserved to be there more than all the other little men of this world. So, aren’t you planning to go back there?”

“No. I pushed myself to the limits of the sky, where the blue ends, to be swallowed by the black and then to be immerged in another sky, because I wanted to reach the truth. Because I was arrogant enough to think that I could find it for myself and for everyone else. But the truth that I’ve found out is different. It can’t be expressed in categories or language”

“Well, this might be a stupid question. Maybe it can’t be utterly expressed with the language. But is there any way to try to tell us something about this truth?”

“Ok, let’s put it like this. The truth is that all the gaps are filled up. That everything is alive and indivisible. The truth is that everything is being. Now others will go to find out what I couldn’t find myself. But what I couldn’t find, that was enough for me to retire from life in the stars. To make me curious again about life, earthly life. Not looking at the sky, but looking around here. Living in the gaps. And feeling that they are being”.

Italian writer based in the UK. View more posts